Before I put the time into designing a game I want to have a clear set of rules or guidelines I can use to see if the game design will live up to my expectations.

I intend to use this system to review a number of games so I can extract design best principles from them.

Some of My Favourite Role Playing Games

The best way to start this process was for me to think what my favourite games were before deciding why they were my favourites.

My favourite games tend to be western-style CRPGs that are computer only (not console) and therefore have a complexity, style and intelligence about them that console games tend not to have. Here’s a list of the games that are top of mind in this category:

The next two groups are not rpgs exactly, but they do have enough rpg elements that I want to consider them.

Turn based strategy games are at the top of the difficulty and challenge in terms of gameplay and intelligence required. Generally I only dabble in them except for a handful of games that have at least some character or roleplaying elements:

Only one series has ever done a half-decent job of combining the classic adventure genre with roleplaying elements and that is Quest for Glory. 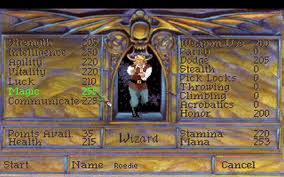 As such is stands alone, sui generis.

I’m not really into jrpgs but I did like them occasionally when I was younger if I didn’t have a good game at the time to play on PC. They had simpler systems than their Western counterparts, emphasized story, generally forced you to take premade characters and seemed to appeal to younger people.

Here is a rather varied list of some of the jrpgs I enjoyed:

Now that I’ve listed some of my favourites that have at least some relation to the kind of games I want to make and review I needed to see if there are any commonalities.

My First Attempt at a CRPG Review System

Based on the above list I tried to come up with some common elements between the games that made me like them.

Not bad for a first start, but after coming up with this list I wanted do a little bit of research to see if I missed anything.

My next step was to see how other people have reviewed computer role playing games.

The CRPG addict is a bloke going by the online name of Chester Bolingbroke. He calls it an online only name but I’m guessing it’s his real name, he just doesn’t want to admit it.

He runs a really great blog where we does playthroughs of older RPGs and then rates them. I highly recommend you read it, especially to get a handle on a large number of older CRPGs you may never have heard of.

The ten factors he uses to rate the games he plays are:

There is a nice site by Laura Redish that reviews a number of popular CRPGs.

There are a number of common elements between Laura’s system and the ones discussed by both Chester Bolingbroke and myself.

It is interesting the she has puzzles and mental challenges as a separate item. This shows that everyone prioritizes different elements.

I have long had a distrust of game magazines. The reviews they tend to give games by larger publishers are much higher than I believe they deserve.

Since Computer Gaming World shut down a number of years ago I hadn’t looked at a game magazine until I did this research. Having said that I thought it was helpful to at least look at a couple of reviews by “professional reviewers” to see if there was anything I could learn from them.

I skipped the first ten or so I found, the people at those unnamed magazines don’t even know how to do anything closely relating a “proper” review that a gamer would find helpful.

Of the current magazines PC Gamer seems to be one of the longest surviving ones that is at least semi-reputable.

I have also not heard as much about them ramming as much politically correct messaging down gamers’ throats.

I am basing the research here on their review of Wasteland 2.

They only give a final numeric rating out of 5, which seems to be common these days. This is not all that helpful since an aggregate number is useless in terms of telling how good the gameplay is versus the graphics.

A big problem the reviewer had was that the game was too complex… so the reviewer and I probably don’t have a lot in common in terms of games we like.

They did mention that some of the skills were useless, so that was useful feedback. If you are going to include a skill, make sure it gets used in the game.

As I feared there was nothing to learn from modern games journalism, the hobbyist sites listed above game far more helpful reviews.

Now that I have looked at three other review sites (I didn’t include other ones that didn’t add anything new to the conversation), I need to see if I can distil any lessons learned from them or see if I need to make improvements to my rating system.

… is the system I started with above with extra weighting on the CRPG System and Gameplay elements. While the first two sites by the CRPG Addict and Laura Redish both had good review systems I still preferred the one I came up with. But both those sites made great points that I will want to consider in the various categories in my system.

Yes, that was rather anti-climactic. At least in reviewing a number of other reviewers I feel more confident with the system I made.

Here is the final out of 100 (a nice round number) point system I will be using:

I considered making story worth more but with CRPG games. At least some of the story should be created by the player. Or the player should utilize sandbox-style elements within the game if possible.

What do you think? Did I get it right?

Are there any other sites or guidelines I should have considered or did my first attempt achieve game review perfection?

Greg Caughill is the owner and creative director of Broken Staff Studios.